Sources in Apple hardware engineering indicate the company is working on an astounding new storage technology, that will revolutionize the industry. According to sources, optical cheese drives have been seen and smelled in test units throughout One Infinite Loop.

While having a short shelf life, cheese is highly ubiquitous, and with a stack of individually sliced American cheese going for $1.50, optical cheese brings an exciting alternative to the world of cheap data storage. 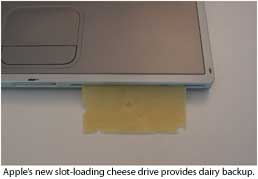 Refusing to confirm or deny that Apple was working on optical cheese drives, Senior Vice President of Hardware Engineering Jon Rubinstein did validate the importance of the technology.

“Highly perishable optical storage is the wave of the future,” Rubinstein said. “Uh… much like we said DVD-RAM was. Only this time we’re totally sure.

“No, really. You can take optical cheese to the bank.

Sources were sketchy on the data storage capacity of a typical slice of cheese, but indicated that, as one would expect, cheese with holes in it holds less data than solid cheese.

“Unfortunately,” one source said, “Gruyer is the best cheese for data storage. You can really pack a lot of segments on to gruyer for some reason. It’d be nice if it was a more readily available cheese like cheddar, but… gruyer. What are ya gonna do?

“No, really. It’s gruyer. I don’t know why you’re having such a hard time with this.”

Despite initial suspicions, there is in fact a cheese called “gruyer”.

Apple optical cheese drives are expected to be announced at DairyWorld 2004 in Wisconsin in August.